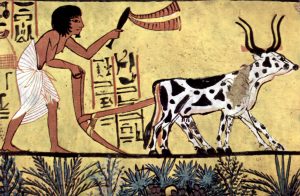 Prior to all the modern pest control techniques, ancient

Egyptians used pest-destroying animals as their defense against the harmful species. The most common animal used were cats who could efficiently keep rodents away in the radius of 50 yards. Even today, owning a cat on a farm can reduce the amount of rats which can be a very cheap alternative for professional pest control methods.

Biological pest control is the most natural method known today. It efficiently reduces the number of pests without leaving any consequences for the rest of the environment. This treatment works by putting substances such as bacteria which kills pests (e.g. mosquitoes) in water sources while still being safe for humans to drink. The goal of the biological pest control is to complete the task of killing the dangerous species without affecting any other aspect of nature.

Mechanical pest control method includes the use of equipment as well as devices to get the job done. The most often used technique is creating a protective barrier between the plant and the insect. This is closely related to the physical pest control method which removes and attacks the pests and thus prevents their spreading and further destruction of the plant. The key to protecting property from these dangerous species is removing anything that would lead to spreading the pests.

Such material is mostly garbage where, in just a day or two, pests can find food and place to stay until their next mission of destroying your crops. Getting read of any still water such as puddles is highly recommended as that is another place where pests could find a home.

Going from insects to rodents, a pest control method used for this species is often the poisoned bait. However, there is a dangerous side to this very effective method. By feeding rats the poisoned meat you will surely get rid of them. However, you’re risking if any larger animal eats the meat, they will get infected. People have died from contact with the meat or eating the animal who previously had eaten the same poisoned meat. This method, even though very efficient, is not to be messed with.

Field burning is a more traditional method. After the harvest, the whole field is burnt to kill any harmful species including eggs which may have been left. This type of pest control will surely clean your field to the core.

Trap cropping might be the most strategic method out there. It involves a trap crop which is basically a plant that attracts pest so that they are distracted from other plants on the field. This way, the pests will circle around the trap crop making it easier to control them with other methods such as using pesticides.

Pesticides are the most common pest control method which can be done by anyone. They are very simple to use, especially the ones which come in a spray. However, some of these substances may cause cancer and are very harmful to the environment.